Boötes Void: Claimed To Be The Most Scary Place In The Universe

As it turns out, apart from black holes, the Boötes Void is considered the scariest place in the universe. The reason is, empty space is like an empty place that does not contain anything. The mystery of it is still being further explored by scientists.
Boötes Void is also often referred to as The Great Nothing. Black holes are not completely empty space, but matter with a very strong gravity, in contrast to the Boötes Void.
If we look at the stars in the sky at night, we will think that the universe is as dense as a city in outer space.
The Boötes Void is a vast expanse of empty space, unlike any other part of the universe. The empty space was discovered in 1981 by the team and astronomer Robert Kirshner.
The Boötes Void is a large vacuum with a very large area and is spherical in shape. It is about 700 million light years from Earth.
The name Boötes is taken from its location within the range of the constellation Boötes. Because it is so large, Boötes is called a Super void. The Super void has a diameter of 250 million light years as seen from observable distances.
Its volume is 236,000 Mpc3 (cubic megaparsecs), which makes it the largest void in the universe that has been observed by humans.
The Milky Way sits in the center of the Boötes void, astronomer Greg Aldering points out. Scientists are looking for anomalies in this region of space.
According to computer models, the voids smaller than Boötes are caused by galaxies approaching each other and being attracted by their gravity.
This then causes the formation of space voids, one of which is the Boötes Void. Boötes Void is caused by a snowball effect, i.e. rapidly increasing in size and intensity, but another new theory states that Super voids are created by mixing smaller voids.

Boötes Void is a Super void created by the merging of smaller voids and the result of the ever-expanding universe.
Due to the discovery of vacuum, scientists revised the idea of ​​galaxy formation because it was based on the distribution of matter throughout the universe.
Although the Boötes void is an extraordinary and frightening void, it turns out that there is one thing that needs to be understood about the great void in the universe. Boötes void is not just an endless black and dark empty space. As previously explained, space is a very large and spherical area.
However, it contains several galaxies. In 1987, astronomers J Moody, Robert P. Kirshner, G. MacAlpine, and S. Gregory discovered the galaxy in the Boötes void.
Findings are continuously updated throughout the observations. In 1988, M. Strauss and John Huchra discovered 3 more galaxies within it.
Then, in 1989, observations made by astronomers Greg Aldering, G. Bothun, Robert P. Kirshner, and Ron Marzke discovered 15 more galaxies. Thus, the total number of galaxies in the Boötes void is 60 galaxies.
Given its vast territory, it should be enough to accommodate 10 thousand galaxies. According to some scientists, cavities or voids are a natural thing in the universe. Another hypothesis is that the Boötes void was the center of the Big Bang explosion that formed the solar system.
The void is not just the Boötes cavity, but there are many voids in the universe that exist outside the galaxy supercluster.
Some of these other voids have no galaxies in them, and some have multiple galaxies you can count on your fingers. The Boötes cavity is one of the cavities among other cavities that have yet to be observed in depth.

Facts About Boötes Void: Not Shaped Like The Photo Below 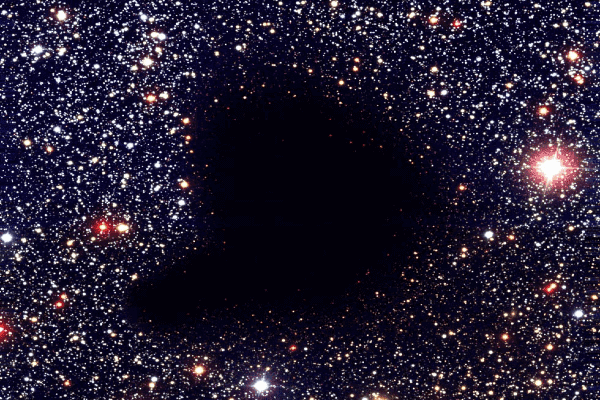 The photograph is often used as evidence of Boötes' emptiness. The photo is the dark nebula Barnard 68. The nebula is a dark molecular cloud that can absorb starlight. It is in the direction of the constellation Ophiuchus and is located within the Milky Way galaxy 400 light years away.
Barnard 68 is very dark indeed. Stars cannot be seen behind the nebula. The nebula was added by astronomer Edward Emerson Barnard to the dark nebula catalog in 1919. The catalog contains 350 objects published in 1927. The Barnard Nebula 68 is extremely cold.
There are about 3.7 thousand stars behind Barnard. The nebula is thought to be the site of the creation of new stars. So, the photo is not an image of the void of Boötes, but the dark nebula of Barnard 68.

The Boötes Void is proof that the universe is vast. The web of the cosmos that we cannot see with the naked eye is too big to comprehend.
Read Also: About Cyborgs and the Future of Humans
Even though the Boötes void is the scariest place in the universe, we still don't know the greatest secret of the void of space.
Is it true that the Boötes void is where matter was first detonated during the Big Bang? Or is outer space the revealer of our universe?
Next Post Previous Post
science